Wedding Traditions: Is it really bad luck for the groom to see the bride before the wedding? 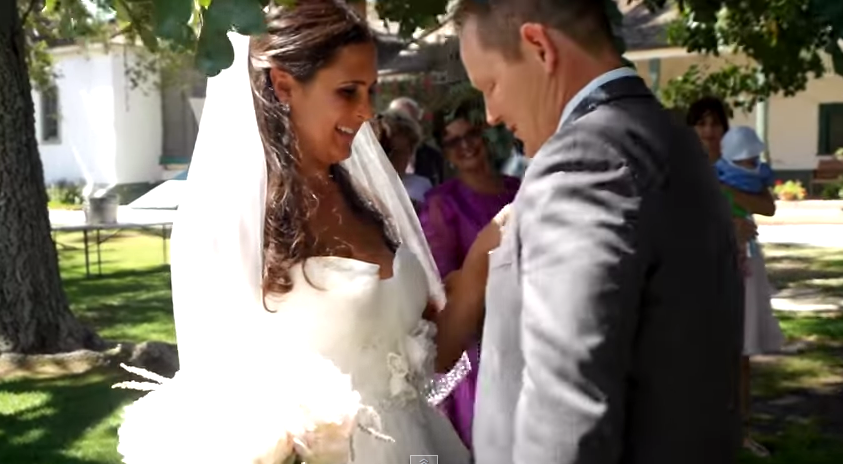 This tradition appears to originate from the business-like nature of arranged marriages. Arranged marriages were deals made between families with the goal of a father marrying his daughter off to a man who came from a wealthy family. In order to ensure the suitor would not back out of the deal, the couple was not allowed to see each other before the wedding. Some sources we found even suggest the veil was used to conceal the bride’s appearance until vows were exchanged and the deal sealed. Other sources say the wedding veil custom “originated in Rome, when a bride would wear a veil down the aisle to disguise herself from evil spirits who were jealous of her happiness.”(CNN Living). A third source suggests, “The veil originally symbolized the bride's virginity, innocence, and modesty. The veil can be traced back to Roman times when it was a complete head to toe cover (that was later used as her burial shroud!).” (bridalwhimsy.com).

While the tradition of wearing a veil is very common today, the tradition of not seeing the bride in her dress before the ceremony has faded away. Couples often take advantage of pre-ceremony time to get their photos taken while make up and hair are freshly applied and groomed. This also allows them to join in the celebration of cocktail hour, when they would otherwise be whisked away for photos. For some couples, seeing each other before the ceremony calms nerves and provides an important time for them to be together privately before being the center of attention surrounded by well wishers.
When a groom sees his bride in her dress for the first time, it can be an emotional moment brides want to remember. For this reason, some couples choose to do a video of the big reveal before the ceremony.

Whatever traditions you choose to incorporate into your wedding day, make sure they are meaningful to you and not just an obligation. Congratulations and happily ever after!

Popular posts from this blog

Mobile Manicure Services for Your Wedding and Bachelorette Parties

October 12, 2016
There are several services on a bride’s mind and checklist in the months and days leading up to her wedding. It can get tiring running around to tastings, dress fittings, and other appointments. So why not take advantage of a service that comes to you! Mobile Manicures Ventura is unique in bringing their manicure and pedicure technicians to your wedding or bachelorette party. So sit back, relax, and enjoy the pampering and company of your closet friends! We had the chance to interview JoDee Renteria, owner of Mobile Manicures Ventura . Below you’ll find more information about her company and services.   I started this mobile service more than three years ago because, let's face it, no one is doing it! My business fills the special needs of two groups of people. Number one, Senior Citizens who can no longer get out and about or are bedridden, even in hospital. Number two, Bachelorettes and Wedding parties. The great thing about the latter is I hire a few licensed techni
Post a Comment
Read more

Wedding Trends that Wont Get Old

February 06, 2020
Smaller Guest Lists Let love sweep you off your feet, not a room full of people to greet! After months (or maybe even years!) of planning, you will be surprised at how quickly your wedding day flies by. At the end of it all you will likely feel exhausted. . . and hungry! One way to truly savor the day is to spend it with the people you love the most. So don’t extend an invitation to anyone you feel obligated to or someone who you worry might be offended if left out, or any distant relative you don’t speak to on a regular basis. A smaller guest list will eliminate stress and allow you to spend more time and money entertaining those closest to you. Your wedding day will feel more intimate and warm surrounded by the people who share in your everyday happiness. Live Bands/Entertainment One more trend we love is live entertainment. This doesn’t mean you have to do away with the DJ--an experienced MC can be a great asset to assist with your event schedule,
Post a Comment
Read more

Small Backyard Wedding on a Budget

March 22, 2019
Having a backyard wedding isn’t always the cheapest way to go. Even if you keep your guest list on the small side(up to 30 guests), expenses can quickly add up. That said, we’ve come up with a few tips to help you pull off a small stylish backyard wedding on a budget. Warning: a lot of DIY work is required but hey, you’ll get to handle all the details yourself –or at least hand them over to some very devoted friends & family! Don’t get discouraged! Venue costs can be a large part of your wedding budget, so think of the money you’ll save by skipping this all together! Well, sort of. . . wedding venues are designed to host events and they’ve got celebrations down to a tee. They’ve got the experience and expertise of countless events under their belt and a list of professionals they like and trust to get the job done right. Planning and executing your own backyard wedding will require a lot of time and effort, organization, and planning on your part but it can be done. You’ve j
6 comments
Read more

VW Blogger
VenturaWedding.com is a resource for brides in the process of selecting a wedding location. This blog was created for the enjoyment of our brides. It will feature articles on all things wedding from unique gift ideas, to helpful bridal resources, and wedding etiquette. At VW we welcome your comments and encourage you to share your advice and knowledge with other brides. We also have a Ventura Wedding Forum that can be found by visiting our website at VenturaWedding.com